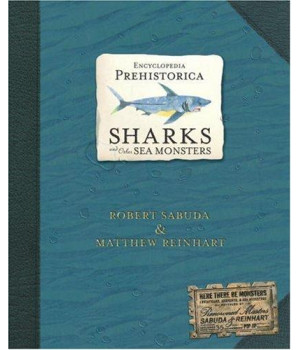 Just when you thought it was safe to go in the water! The second astonishing ENCYCLOPEDIA PREHISTORICA book from Robert Sabuda and Matthew Reinhart is about to pop up everywhere.

While dinosaurs patrolled the lands, massive prehistoric sharks, giant scorpions, and colossal squid cruised the ancient oceans - most with just one thing in mind: eat or be eaten. In this companion volume to the best-selling ENCYCLOPEDIA PREHISTORICA: DINOSAURS, pop-up masters Robert Sabuda and Matthew Reinhart explore the prehistoric underwater world, where monsters like megalodon ruled the waves.

Full of captivating facts and more than 35 breathtaking pop-ups, this incredible volume is sure to astonish and amaze everyone from budding marine biologists to confirmed landlubbers. After all, if prehistoric coelacanths and crocodiles are still around, what else might be lurking in today's largely unexplored oceans?

Specifications of Encyclopedia Prehistorica: Sharks and Other Sea Monsters