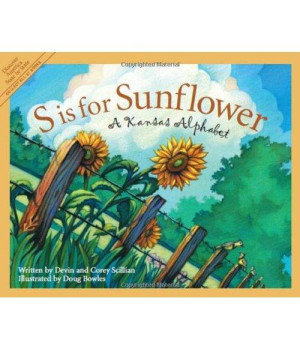 S Is For Sunflower: A Kansas Alphabet (Discover America State By State)

S is for Sunflower: A Kansas Alphabet (Discover America State by State)

Nicknamed the "world's breadbasket," the contributions from the great state of Kansas reverberate far beyond its borders. Kansas has given us leaders in politics (Dwight D. Eisenhower), aviation (Amelia Earhart); and sports (Wilt Chamberlain); leads our nation in wheat production; and fuels our Hollywood image of the wild West (Dodge City). From A-Z, S is for Sunflower explores the broad plain of history and people that make up the state of Kansas.Born a few miles and a few months apart, Corey and Devin Scillian would meet 17 years later at Junction City Senior High School. Both graduates of the University of Kansas, Corey is a ceramic artist and Devin anchors the news for the NBC affiliate in Detroit. Devin's other children's books include Cosmo's Moon, P is for Passport: A World Alphabet, and the national bestseller A is for America: An American Alphabet. The authors live in Michigan with their four children. A graduate of the Columbus College of Art & Design in Columbus, Ohio, Doug Bowles has been a freelance illustrator for 20 years. In addition to Doug's illustrations for children, he enjoys working with a wide range of clients in the advertising, corporate, and editorial communities. His work has been selected many times in the Society of Illustrators West competition, and he has had several gallery showings. Doug lives in Leawood, Kansas, with his wife and two children.

Specification of S is for Sunflower: A Kansas Alphabet (Discover America State by State)