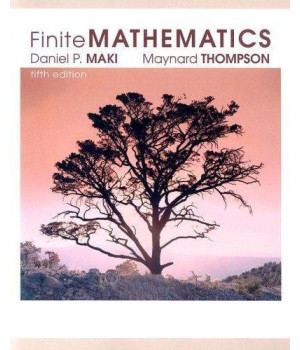 "Finite Mathematics" is designed for the one-term course in finite math taken primarily by students majoring in business, economics, life sciences, and the social sciences. The mathematical integrity of the previous edition has been maintained in the new edition. The core topics and their applications are presented in Parts One and Two of this text, and additional applications are developed in Part Three. Parts One and Two are independent of one another, thus either probability or linear mathematics may be studied first. The authors' emphasis is on developing and testing the student's problem-solving ability. They use discussions and examples to illustrate ideas and techniques to aid the student in acquiring these skills. Some examples and exercises are straightforward computation, while others require that the problem be solved by combining several techniques. Since it is impossible to provide examples of every type of problem the student will encounter in the text, the authors have identified and treated the fundamental principles that should be used in unfamiliar situations.