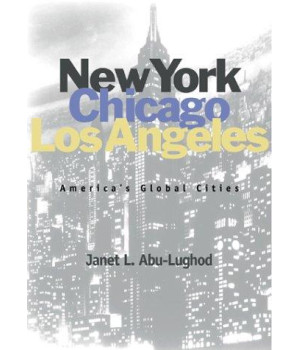 New York, Chicago, and Los Angeles -- for all their differences, they are quintessentially American cities. They are also among the handful of cities on the earth that can be called "global". Janet L. Abu-Lughod's book is the first to compare them in an ambitious in-depth study that takes into account each city's unique history, following their development from their earliest days to their current status as players on the global stage.ReviewThis fine book provides necessary examples of how the city may be intelligently loved. --The New RepublicAbout the AuthorJanet L. Abu-Lughod, professor emerita of sociology of Northwestern University and the Graduate Faculty of the New School for Social Research, has been writing about and studying cities for more than fifty years. Her books include From Urban Village to East Village: The Battle for New York's Lower East Side; Changing Cities: Urban Sociology; Before European Hegemony: The World System A.D. 1250-1350; Rabat: Urban Apartheid in Morocco; and Cairo: 1001 Years of the City Victorious, among many other publications. In 1999 she received the Robert and Helen Lynd Award (American Sociological Association, Section on Community and Urban Sociology) for distinguished lifetime contributions to the study of cities.