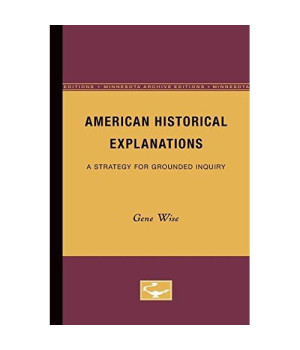 In this new edition of American Historical Explanations,Gene Wise expands his examination of historical thinking to include the latest work in American Studies, the new social history, ethnography, and psychohistory. Wise asserts that historians address their subjects through an intervening set of assumptions, or what he calls explanation forms, similar to the philosophical paradigms that Thomas Kuhn has found in scientific inquiry. Through analysis of historical-cultural texts (including the work of V. L. Parrington, Lionel Trilling, and Perry Miller) he defines the forms used by several groups of American historians and traces the process by which an old form breaks down and is replaced by a new set of assumptions. Throughout, he aims to study the process of change in the history of ideas. His conclusions extend beyond historiography and will be useful for those interested in literature, social sciences, and the arts.