Home » Publisher » Broadway Books » Education » Snowball Earth: The Story of a Maverick Scientist and His Theory of the Global Catastrophe That Spawned Life As We Know It 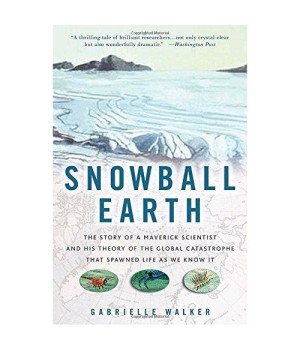 Snowball Earth: The Story Of A Maverick Scientist And His Theory Of The Global Catastrophe That Spawned Life As We Know It

Reviews(0)  |  Write a review
Tags: DADAX1400051258, 9781400051250, Snowball Earth: The Story of a Maverick Scientist & His Theory of the Global Catastrophe That Spawned Life As We Know It, Broadway Books Products, Education Products
Description Reviews(0)

Snowball Earth: The Story of a Maverick Scientist and His Theory of the Global Catastrophe That Spawned Life As We Know It

Did the Earth once undergo a super ice age, one that froze the entire planet from the poles to the equator? In Snowball Earth, gifted writer Gabrielle Walker has crafted an intriguing global adventure story, following maverick scientist Paul Hoffman’s quest to prove a theory so audacious and profound that it is shaking the world of earth sciences to its core.In lyrical prose that brings each remote and alluring locale vividly to life, Walker takes us on a thrilling natural history expedition to witness firsthand the supporting evidence Hoffman has pieced together. That evidence, he argues, shows that 700 million years ago the Earth did indeed freeze over completely, becoming a giant “snowball,” in the worst climatic catastrophe in history. Even more startling is his assertion that, instead of ending life on Earth, this global deep freeze was the trigger for the Cambrian Explosion, the hitherto unexplained moment in geological time when a glorious profusion of complex life forms first emerged from the primordial ooze.In a story full of intellectual intrigue, we follow the irascible but brilliant Hoffman and a supporting cast of intrepid geologists as they scour the planet, uncovering clue after surprising clue. We travel to a primeval lagoon at Shark Bay in western Australia, where dolphins cavort with swimmers every morning at seven and “living rocks” sprout out of the water like broccoli heads; to the desolate and forbidding ice fields of a tiny Arctic archipelago seven hundred miles north of Norway; to the surprising fossil beds that decorate Newfoundland’s foggy and windswept coastline; and on to the superheated salt pans of California’s Death Valley.Through the contours of these rich and varied landscapes Walker teaches us to read the traces of geological time with expert eyes, and we marvel at the stunning feats of resilience and renewal our remarkable planet is capable of. Snowball Earth is science writing at its most gripping and enlightening.From the Hardcover edition.

Specification of Snowball Earth: The Story of a Maverick Scientist and His Theory of the Global Catastrophe That Spawned Life As We Know It