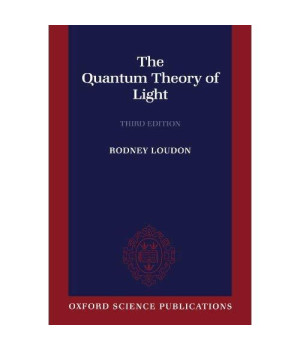 This Third Edition, like its two predecessors, provides a detailed account of the basic theory needed to understand the properties of light and its interactions with atoms, in particular the many nonclassical effects that have now been observed in quantum-optical experiments. The earlier chapters describe the quantum mechanics of various optical processes, leading from the classical representation of the electromagnetic field to the quantum theory of light. The later chapters develop the theoretical descriptions of some of the key experiments in quantum optics. Over half of the material in this Third Edition is new. It includes topics that have come into prominence over the last two decades, such as the beamsplitter theory, squeezed light, two-photon interference, balanced homodyne detection, travelling-wave attenuation and amplification, quantum jumps, and the ranges of nonlinear optical processes important in the generation of nonclassical light. The book is written as a textbook, with the treatment as a whole appropriate for graduate or postgraduate students, while earlier chapters are also suitable for final-year undergraduates. Over 100 problems help to intensify the understanding of the material presented.To request a copy of the Solutions Manual, visit: http://global.oup.com/uk/academic/physics/admin/solutions

Specification of The Quantum Theory of Light (Oxford Science Publications)