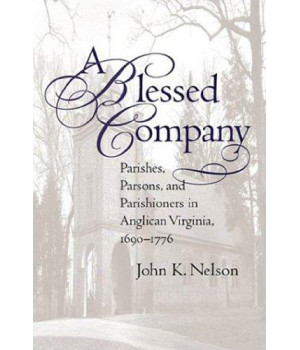 A Blessed Company: Parishes, Parsons, And Parishioners In Anglican Virginia, 1690-1776

A Blessed Company: Parishes, Parsons, and Parishioners in Anglican Virginia, 1690-1776

In this book, John Nelson reconstructs everyday Anglican religious practice and experience in Virginia from the end of the seventeenth century to the start of the American Revolution. Challenging previous characterizations of the colonial Anglican establishment as weak, he reveals the fundamental role the church played in the political, social, and economic as well as the spiritual lives of its parishioners.

Drawing on extensive research in parish and county records and other primary sources, Nelson describes Anglican Virginia's parish system, its parsons, its rituals of worship and rites of passage, and its parishioners' varied relationships to the church. All colonial Virginians--men and women, rich and poor, young and old, planters and merchants, servants and slaves, dissenters and freethinkers--belonged to a parish. As such, they were subject to its levies, its authority over marriage, and other social and economic dictates. In addition to its religious functions, the parish provided essential care for the poor, collaborated with the courts to handle civil disputes, and exerted its influence over many other aspects of community life.

A Blessed Company demonstrates that, by creatively adapting Anglican parish organization and the language, forms, and modes of Anglican spirituality to the Chesapeake's distinctive environmental and human conditions, colonial Virginians sustained a remarkably effective and faithful Anglican church in the Old Dominion.

Specifications of A Blessed Company: Parishes, Parsons, and Parishioners in Anglican Virginia, 1690-1776