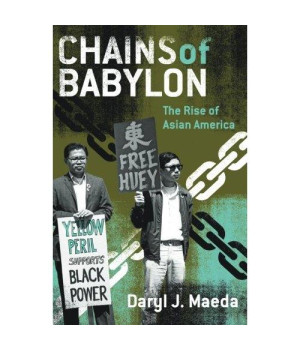 In Chains of Babylon, Daryl J. Maeda presents a cultural history of Asian American activism in the late 1960s and early 1970s, showing how the movement created the category of "Asian American" to join Asians of many ethnicities in racial solidarity. Drawing on the Black Power and antiwar movements, Asian American radicals argued that all Asians in the United States should resist assimilation and band together to oppose racism within the country and imperialism abroad.As revealed in Maeda's in-depth work, the Asian American movement contended that people of all Asian ethnicities in the United States shared a common relationship to oppression and exploitation with each other and with other nonwhite peoples. In the early stages of the civil rights era, the possibility of assimilation was held out to Asian Americans under a model minority myth. Maeda insists that it was only in the disruption of that myth for both African Americans and Asian Americans in the 1960s and 1970s that the full Asian American culture and movement he describes could emerge. Maeda challenges accounts of the post-1968 era as hopelessly divisive by examining how racial and cultural identity enabled Asian Americans to see eye-to-eye with and support other groups of color in their campaigns for social justice.Asian American opposition to the war in Vietnam, unlike that of the broader antiwar movement, was predicated on understanding it as a racial, specifically anti-Asian genocide. Throughout he argues that cultural critiques of racism and imperialism, the twin "chains of Babylon" of the title, informed the construction of a multiethnic Asian American identity committed to interracial and transnational solidarity.

Specification of Chains of Babylon: The Rise of Asian America (Critical American Studies)