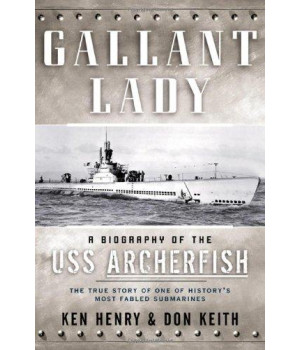 Gallant Lady: A Biography Of The USS Archerfish

Gallant Lady: A Biography of the USS Archerfish

She looked like just about like the other diesel powered, Balao-class submarines crafted in the '40s. But there the similarity ends. Because the Archerfish--named for a fish that kills its victims with a lethal blast of water from below--won a unique, heroic place in military history and the memories of her crew members.

Here is her story: from her assembly in New England, her dedication at the hand of Eleanor Roosevelt, her service in World War II, where she broke the back of the Japanese Navy and sank the largest ship ever sunk by a submarine, to the details of her critical role in the Cold War, crisscrossing the oceans for six years to foil Soviet naval intelligence.

Here too, is the story of her officers and enlsited men, who waited years to serve on the Archerfish. In their own words, these men tell how, against all odds, they sent a Japanese aircraft carrier to the ocean floor . . . served in peacetime in the Navy's only all bachelor crew . . . steered their ship into exotic ports all over the world . . . welcomed B-girls, Japanese war veterans, royalty, Playboy bunnies and a goat aboard ship, with equal hospitality. As they helped their sub outlast fires and even an earthquake, they worked hard, played hard and lived even harder.

An extraordinary real-life odyssey, Archerfish is a vivid, unforgettable portrait of submariners' life.

Specifications of Gallant Lady: A Biography of the USS Archerfish