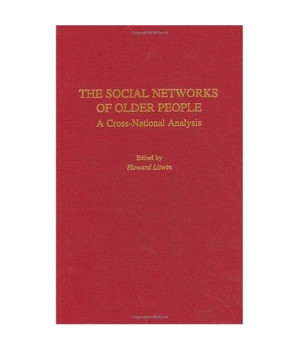 The Social Networks Of Older People: A Cross-National Analysis

The Social Networks of Older People: A Cross-National Analysis

This edited volume examines the social networks of older people in nine countries from a range of perspectives in order to determine the potential of informal support structures to deliver the bulk of care in today's society. Researchers from the United States, Canada, England and Wales, France, Spain, the Netherlands, Sweden, Finland, and Israel present up-to-date analyses of support networks in each of their countries. The social policy implications of the comparative data are critically reviewed. The findings clearly suggest that social network availability is diminishing for a significant minority of elderly people. However, current practice in most countries reveals little purposive interweaving of formal services and informal networks, in order to strengthen the function of the latter and to prolong their presumed benefits.

Specification of The Social Networks of Older People: A Cross-National Analysis