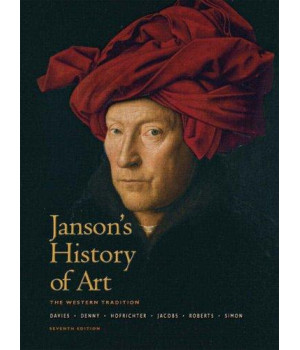 This four-part volume uses an exceptional art program–with sumptuous color pictures–to introduce readers to a succession of art styles from prehistoric times and ancient Egypt, to the vast world of Western painting, sculpture, architecture, photography, and the minor arts. Elegantly written, it contains a balanced and interesting narrative that increases ones ability to understand art. Parts I and II cover The Ancient World and The Middle Ages, with a look at prehistoric; Egyptian; ancient near eastern; Aegean; Greek; Etruscan; Roman; early Christian, Byzantine, and Medieval; Romanesque; and Gothic art. Part III looks at the Renaissance through the Rococo–with a focus on the early and high renaissance in Italy; mannerism and other trends; “Late Gothic” painting, sculpture, and the graphic arts; and the Baroque in Italy, Spain, Flanders, Holland, France and England. Part IV is a treatment on the modern world, including Neoclassicism and Romanticism; Realism and Impressionism; Post-impressionism, Symbolism, and Art Nouveau; Twentieth-Century painting, sculpture, architecture, and photography; and Postmodernism. For those who appreciate art as individual works, rather than a mere collection of data.

Specifications of Janson's History of Art: The Western Tradition