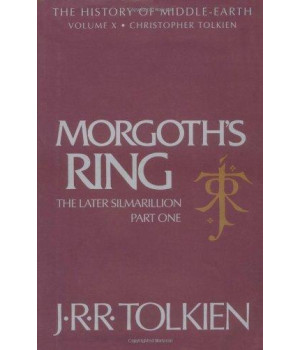 In Morgoth's Ring, the tenth volume of The History of Middle-earth and the first of two companion volumes, Christopher Tolkien describes and documents the legends of the Elder Days, as they were evolved and transformed by his father in the years before he completed The Lord of the Rings. The text of the Annals of Aman, the "Blessed Land" in the far West, is given in full. And in writings never before published, we can see the nature of the problems that J.R.R. Tolkien explored in his later years as new and radical ideas, portending upheaval in the heart of the mythology. At this time Tokien sought to redefine the old legends, and wrote of the nature and destiny of Elves, the idea of Elvish rebirth, the origins of the Orcs, and the Fall of Men. His meditation of mortality and immortality as represented in the lives of Men and Elves led to another major writing at this time, the "Debate of Finrod and Andreth," which is reproduced here in full. "Above all," Christopher Tolkien writes in his foreward, "the power and significance of Melkor-Morgoth...was enlarged to become the ground and source of the corruption of Arda." This book indeed is all about Morgoth. Incomparably greater than the power of Sauron, concentrated in the One Ring, Morgoth's power (Tolkien wrote) was dispersed into the very matter of Arda: "The whole of Middle-earth was Morgoth's Ring."