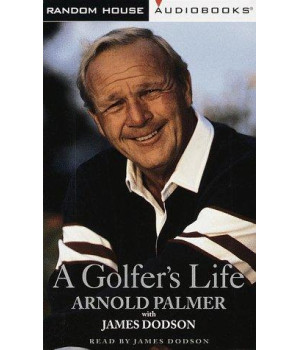 There has never been a golfer to rival Arnold Palmer. He's the most aggressive, most exciting player the game has ever known, a dynamo famous for coming from behind to make bold last-minute charges to victory. To the legions of golf fans known around the world as Arnie's Army, Palmer is a charismatic hero, the winner of sixty-one tournaments on the PGA Tour and still going strong on the Senior PGA Tour. But behind the legend, there is the private Palmer--a man of wit, compassion, loyalty, and true grit in the face of personal adversity.  Writing with the humor and candor that are as much his trademark as his unique golf swing, Palmer gives us the deeply moving story of his life both on and off the links. He recounts his friendships (and rivalries) with greats of the game, including Jack Nicklaus, his  enduringly happy marriage with Winnie, his legendary  triumphs and his titanic disasters, and his valiant battle against cancer.  Returning to the Senior PGA Tour with unmatched zeal after his recovery, Palmer reminded fans of his unfaltering heroism--and the world of golf is thankful.From small-town boy to golfing legend, Arnold Palmer has lived one of the great sporting lives of the twentieth century. Now, with the help of acclaimed golf writer James Dodson, he has created one of the great sports autobiographies of our time.

Specification of A Golfer's Life