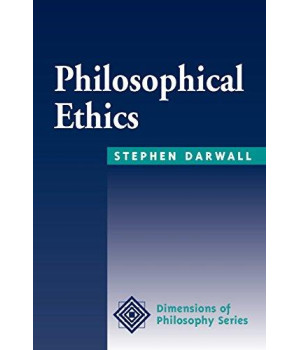 Philosophical Ethics: An Historical And Contemporary Introduction (Dimensions Of Philosophy)

Philosophical Ethics: An Historical And Contemporary Introduction (Dimensions of Philosophy)

Why is ethics part of philosophy? Stephen Darwall’s Philosophical Ethics introduces students to ethics from a distinctively philosophical perspective, one that weaves together central ethical questions such as ?What has value?” and ?What are our moral obligations?” with fundamental philosophical issues such as ?What is value?” and ?What can a moral obligation consist in?”With one eye on contemporary discussions and another on classical texts, Philosophical Ethics shows how Hobbes, Mill, Kant, Aristotle, and Nietzsche all did ethical philosophy?how, for example, they sought to gain insight into what has value through understanding what value itself is. After an introductory section, and one on main approaches to metaethics, chapters discuss ?modern” philosophical moralists?Hobbes, Mill, and Kant?and pre- and postmodern philosophical approaches to ethics in Aristotle, Nietzsche, and the ethics of care.Throughout, the reader is invited to do?rather than just read about?philosophical ethics and, in doing so, to think through questions that face all thoughtful human beings. Themes include the nature of value and moral obligation, freedom and choice, human flourishing, excellence and merit, radical critiques of morality, and the importance of relationships for human life.