Home » Publisher » Broadway Books » Arts, Films & Photography » Rogues' Gallery: The Secret Story of the Lust, Lies, Greed, and Betrayals That Made the Metropolitan Museum of Art 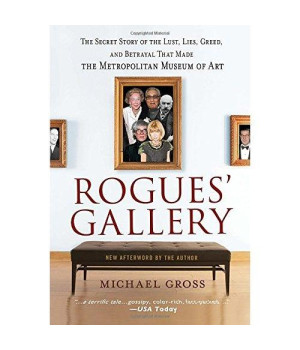 Rogues' Gallery: The Secret Story Of The Lust, Lies, Greed, And Betrayals That Made The Metropolitan Museum Of Art

“Behind almost every painting is a fortune and behind that a sin or a crime.”
With these words as a starting point, Michael Gross, leading chronicler of the American rich, begins the first independent, unauthorized look at the saga of the nation’s greatest museum, the Metropolitan Museum of Art. In this endlessly entertaining follow-up to his bestselling social history 740 Park, Gross pulls back the shades of secrecy that have long shrouded the upper class’s cultural and philanthropic ambitions and maneuvers. And he paints a revealing portrait of a previously hidden face of American wealth and power.

The Metropolitan, Gross writes, “is a huge alchemical experiment, turning the worst of man’s attributes—extravagance, lust, gluttony, acquisitiveness, envy, avarice, greed, egotism, and pride—into the very best, transmuting deadly sins into priceless treasure.” The book covers the entire 138-year history of the Met, focusing on the museum’s most colorful characters. Opening with the lame-duck director Philippe de Montebello, the museum’s longest-serving leader who finally stepped down in 2008, Rogues’ Gallery then goes back to the very beginning, highlighting, among many others: the first director, Luigi Palma di Cesnola, an Italian-born epic phony, whose legacy is a trove of plundered ancient relics, some of which remain on display today; John Pierpont Morgan, the greatest capitalist and art collector of his day, who turned the museum from the plaything of a handful of rich amateurs into a professional operation dedicated, sort of, to the public good; John D. Rockefeller Jr., who never served the Met in any official capacity but who, during the Great Depression, proved the only man willing and rich enough to be its benefactor, which made him its behind-the-scenes puppeteer; the controversial Thomas Hoving, whose tenure as director during the sixties and seventies revolutionized museums around the world but left the Met in chaos; and Jane Engelhard and Annette de la Renta, a mother-daughter trustee tag team whose stories will astonish you (think Casablanca rewritten by Edith Wharton).

With a supporting cast that includes artists, forgers, and looters, financial geniuses and scoundrels, museum officers (like its chairman Arthur Amory Houghton, head of Corning Glass, who once ripped apart a priceless and ancient Islamic book in order to sell it off piecemeal), trustees (like Jayne Wrightsman, the Hollywood party girl turned society grand dame), curators (like the aging Dietrich von Bothmer, a refugee from Nazi Germany with a Bronze Star for heroism whose greatest acquisitions turned out to be looted), and donors (like Irwin Untermyer, whose collecting obsession drove his wife and children to suicide), and with cameo appearances by everyone from Vogue editors Anna Wintour and Diana Vreeland to Sex Pistols front man Johnny Rotten, Rogues’ Gallery is a rich, satisfying, alternately hilarious and horrifying look at America’s upper class, and what is perhaps its greatest creation.